Below is a sample of the beadwork that we have available. Feel free to contact us should you require more information about any of these pieces.

All of the pieces in this gallery were produced by the Xhosa and Zulu of South Africa, with most of the items being made in the 1940’s to late 1960’s. Some of these pieces are strung on cotton, however many of them are strung on animal sinew, as was the custom in the days before cotton became readily available in the villages.

Each piece is unique, designed by the beader - usually for personal use, as a gift to a close family member or lover.

Some of the pieces are unique in their complexity, the beader having chosen to create something unusual, while other pieces such as the collars, girdle’s and necklaces, typically follow the traditional colours and designs common to the district of the community. All are beautiful, in perfect condition and all are for sale.

This cloak would be worn by a married Zulu woman from the Nongoma district of northern KwaZulu and is typical of 1960’s style beadwork. 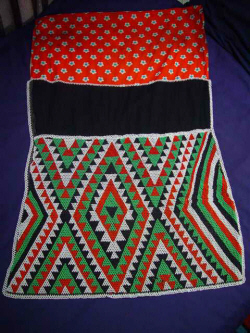 An unusual piece as it is more common to find individual belts than a joined collection like this. It was made and worn by a Thembu / Xhosa woman from the Lady Frere district of the Eastern Cape. Circa 1960’s 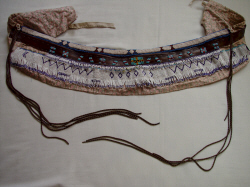 
All made from Acacia caffra or “mnyamanzi” wood. The long ones being used by senior Xhosa women. The higher the status of the woman, the longer the stem of the pipe.
The short pipes are smoked by men, while the one in the shape of a horse’s head, is totally unique. 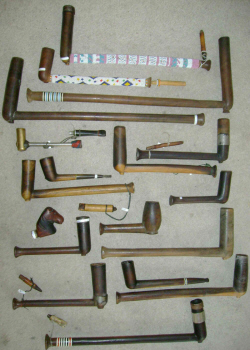 These sticks were used for self-defence, stick-fighting or as protection against snakes and were traditionally made from wild-olive or “umnquma” wood. The wirework is relatively uncommon in the Eastern Cape, being used far more often by the Zulu or Southern Sotho.
The beaded cow-tail whisk – itshoba is used by diviners / shamans, ”amagqirha,” praise-singers, ”izimbongi” or by ordinary people partaking in a traditional dance. When used by diviners it is made from the tail of an ox, sacrificed to mark the completion of the diviner’s training. 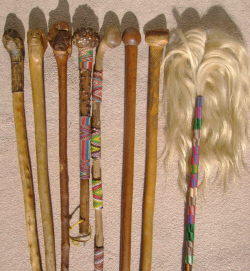 The collars on the left of the picture are beaded in the Mfengu-style while the those on the right are in the Thembu / Xhosa-style. These collars are found in the Lady Frere and Cofimvaba districts of the Eastern Cape and are worn by senior adults – both men and women. 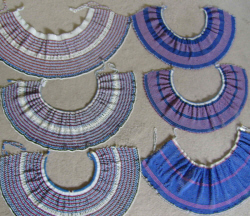 These were worn by Thembu women under their full skirts “umbhaco.” They normally are made from Venetian, handcut beads and the brass washers,”izingqwemesha,” are of European manufacture and were sold to the Thembu by European traders. 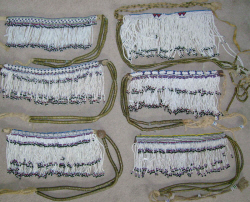 These purses were commonly made in the 1960’s, in urban townships such as Langa near Cape Town and were bought by migrant workers as gifts for their wives in the rural areas. The belts and purses are often decorated with bicycle reflectors. 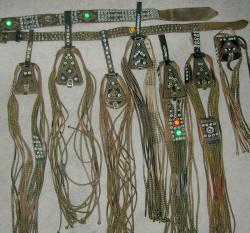 Should you wish to acquire any of these pieces, please contact me at mark@africabead.com